Striking novel about a woman who is drawn to an enigmatic store through which she begins a spiritual journey involving beings from ancient and traditional cultures inhabiting the raw landscape.

Feeling disconnected from her life, a woman named Jessie stumbles on a “bone-white” store by the lakeshore in northern New Mexico. A heavy wrought-iron sign reads “Weather’s Store,” and the place gives Jessie the sensation of an old dream. From there, she meets the mysterious, green-eyed Weather and is introduced to a host of characters, including frightening Indian witches; Maya, a weaver and healer; surreal, powerful women spirits; Azteca Marta, an herbalist; Marta’s son Mateo, the blended soul of New Mexico; old Juan Antonio; and a heartbreaking, hopeless Indian adolescent. Alternately frustrated, confused, awed and intrigued, Jessie comes to a deeper understanding and acceptance of her destiny through these mystical mentors and guides. Unlike traditional novels, Giomi’s work presents a series of parables and haikus utilizing the land, cultures and people of New Mexico, to which the author, a native of the same region, feels a deep connection. These fragments can have elegance and depth, such as when homemade crosses marking death are equated to “resting places…reminders to stop and remember and, then with infinite patience, to bless what must be left behind.” Giomi doesn’t romanticize the primitivism and poverty of this part of the world while recognizing its power, beauty and sacred quality and respecting its wisdom. She touches on the tragic alcoholism prevalent among Native Americans, particularly youth, who are “trapped between two worlds” and often die young of alcohol abuse, homicide, suicide and despair. Her background as a psychologist occasionally reflects in the “work” Jessie is encouraged to do (“To embark on any journey…you must confront what is hiding in the darkness” or “admit the wound”), but the ultimate journey is metaphysical, a reclamation of the soul. Weather is represented literally by rain, winds and snow and becomes a metaphor for the tempests of the human spirit.

One woman’s search for self in New Mexico achieves an abstract, meditative beauty. 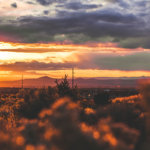